Grace: It's Our Way of Life

As Episcopal Christians we
Worship at home daily and together weekly;
Study the Scriptures, our tradition, and what it means to be a disciple today;
Serve our families, our parish, and our world in the name of Christ.

Everything we do is done with an ethic of Welcome
because we are only here by Grace.

Sermon, Third Sunday Of Lent, Year A, 23 March 2014 The Woman At The Well And Our Habitual Responses 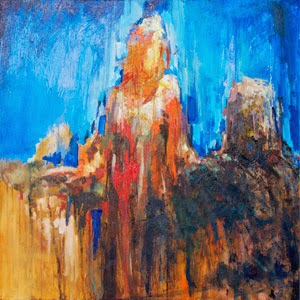 You can see more of his works at www.hyattmoore.com.  Used by permission.

Sermon on the Woman at the Well.  A Samaritan woman that we often see through two main bits of information after her gender and race: the time of day and her five husbands plus one man.  These have been read through our usual habitual responses and miss the points that John is showing us in this central epitome story of γυνή - woman.

Almighty God, you know that we have no power in ourselves to help ourselves: Keep us both outwardly in our bodies and inwardly in our souls, that we may be defended from all adversities which may happen to the body, and from all evil thoughts which may assault and hurt the soul; through Jesus Christ our Lord, who lives and reigns with you and the Holy Spirit, one God, for ever and ever. Amen.


Important passages for this week from the Gospel of John:


2On the third day there was a wedding in Cana of Galilee, and the mother of Jesus was there. 2Jesus and his disciples had also been invited to the wedding. 3When the wine gave out, the mother of Jesus said to him, ‘They have no wine.’ 4And Jesus said to her, ‘Woman, what concern is that to you and to me? My hour has not yet come.’ 5His mother said to the servants, ‘Do whatever he tells you.’ 6Now standing there were six stone water-jars for the Jewish rites of purification, each holding twenty or thirty gallons. 7Jesus said to them, ‘Fill the jars with water.’ And they filled them up to the brim. 8He said to them, ‘Now draw some out, and take it to the chief steward.’ So they took it. 9When the steward tasted the water that had become wine, and did not know where it came from (though the servants who had drawn the water knew), the steward called the bridegroom 10and said to him, ‘Everyone serves the good wine first, and then the inferior wine after the guests have become drunk. But you have kept the good wine until now.’ 11Jesus did this, the first of his signs, in Cana of Galilee, and revealed his glory; and his disciples believed in him.

37 On the last day of the festival, the great day, while Jesus was standing there, he cried out, ‘Let anyone who is thirsty come to me, 38and let the one who believes in me drink. As* the scripture has said, “Out of the believer’s heart* shall flow rivers of living water.” ’ 39Now he said this about the Spirit, which believers in him were to receive; for as yet there was no Spirit,* because Jesus was not yet glorified.


25And that is what the soldiers did.
Meanwhile, standing near the cross of Jesus were his mother, and his mother’s sister, Mary the wife of Clopas, and Mary Magdalene. 26When Jesus saw his mother and the disciple whom he loved standing beside her, he said to his mother, ‘Woman, here is your son.’ 27Then he said to the disciple, ‘Here is your mother.’ And from that hour the disciple took her into his own home.

31 Since it was the day of Preparation, the Jews did not want the bodies left on the cross during the sabbath, especially because that sabbath was a day of great solemnity. So they asked Pilate to have the legs of the crucified men broken and the bodies removed. 32Then the soldiers came and broke the legs of the first and of the other who had been crucified with him. 33But when they came to Jesus and saw that he was already dead, they did not break his legs. 34Instead, one of the soldiers pierced his side with a spear, and at once blood and water came out. 35(He who saw this has testified so that you also may believe. His testimony is true, and he knows* that he tells the truth.) 36These things occurred so that the scripture might be fulfilled, ‘None of his bones shall be broken.’ 37And again another passage of scripture says, ‘They will look on the one whom they have pierced.’

*The New Revised Standard Version (Anglicized Edition), copyright 1989, 1995 by the Division of Christian Education of the National Council of the Churches of Christ in the United States of America. Used by permission. All rights reserved.
by Daniel Paul Richards

Names and stories have been made up or mixed up to protect real people from false impressions that may be created by telling a single pericope from the long novel of experience.

Promote Your Page Too